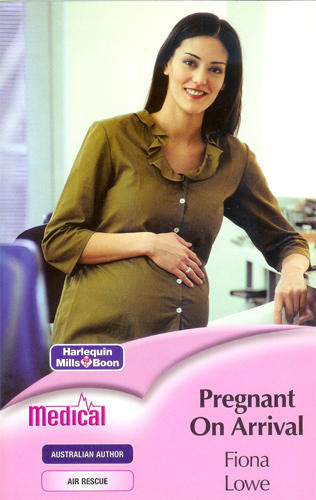 Pregnant in the Outback!

Dr. Bronte Hawkins - newest recruit on the Muttawindi Flying Doctors team. A new start is just what she needs to overcome her recent heartache.

Dr. Huon Morrison - this brooding flight doctor is scarred by the mistakes of others. He is determined that the townspeople of Muttawindi will not be let down ever again. He’s confident that with Bronte on his team they’ll be the best - as long as he can keep his feelings for her in check!

But on her arrival, a routine check unsettles both Huon’s and Bronte’s dreams - Bronte discovers she’s pregnant.

My debut book, 'Pregnant on Arrival' (July 2006), grew out of a holiday in the Australian Outback where I visited a The Royal Flying Doctors Service (RFDS) base. As I learned about the wonderful work of the dedicated doctors and nurses who provide a 'mantle of safety' for people in the outback, I began to wonder what brings health professionals to the service and what personal challenges do they face? 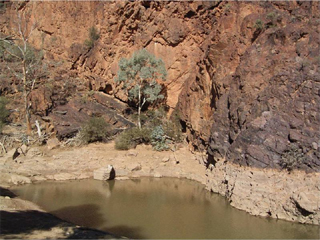 What would happen if you came thousands of kilometers from home desperate to make a new start, only to discover your new life was more dramatic and unexpected than you ever imagined? This is Bronte's story.

And what if you thought your life was settled and ordered, the way you needed it to be to protect your heart and suddenly the arrival of one person challenged you to doubt and question everything you believed about yourself? This is Huon's story.

Bronte and Huon's adventure unfolds against the glorious backdrop of the burnt browns and reds of the Australian Outback. They  face the medical challenges of working in remote areas, and they learn to deal with an undeniable attraction that scares them both.

The working title of this book was OUTBACK BABY and you guessed it, it's set in the outback of Australia in a fictitious town called Muttawindi, which I imagined to be near Broken Hill. Broken Hill is in  the far west of NSW and links itself more with Adelaide than Sydney.  Salt bush, shale, endless blue skies, exciting medical drama, and two doctors who at first don't realise they really do belong together.

This is the fourth book I've written over a ten-year period.

Pregnant on Arrival is my debut novel with Harlequin Mills & Boon. I hope you enjoy reading it as much as I enjoyed writing it!

A wave of embarrassment raced through her. Oh, no, please no. But she knew the score. This would be her new boss. And his first view of her had been with her bottom up in the air. She wanted to crawl inside the recalcitrant suitcase and hide.

Bronte glanced up very slowly from her kneeling position. A pair of moleskin-clad legs came into view. Very long legs wearing work-boots caked with red clay. She followed his line of leg up across a broad chest to his face. Tanned brown by the outback sun, he had the telltale lines of a man in his thirties. High cheekbones defined a strong face, and the day-old stubble outlined a solid jaw.

Glossy magazine handsome he wasn't, but he had an attractive ruggedness about him. A man who lived life to the full. The type of man her sister dated. The type of man she now knew never dated her.

Except his sky-blue eyes seemed to be appreciating her behind. She must be imagining things. Travel fatigue must have got to her.

'Dr. Morrison?' Bronte forced her voice to sound light and friendly rather than nervous and embarrassed. Without thinking she stuck out her hand to greet him, forgetting she was still kneeling.

His hand grasped hers firmly and a tingling sensation raced up her arm. He quickly pulled her to her feet, the strength of the pull propelling her straight into his chest. His very solid chest.

The warmth of his body mixed with hers. She stepped back quickly, heat flooding her face. 'Ah, sorry. Thank-you.'

For a brief moment his lips widened into a grin, exposing straight, white teeth and he nodded. 'Yes, I'm Huon Morrison.' His gaze rested on Bronte, intense and vivid blue. Then his eyes flicked over the dilapidated case and he smiled. Dimples appeared giving him a mischievous look.

Butterflies took flight in her stomach.

'By the looks of you and your case, this final leg of your trip to Muttawindi is about all you're both up to.'

'There's no hope for the case, but I'm fine.' She tried to smile but her face felt stiff. Why was her heart hammering? She was flustered, as well as giving the impression of being a total klutz.

She hauled in a calming breath. Time to take charge. After all, this was her new life. Taking in a deep breath she flicked her head up, looked Dr. Morrison straight in the face and noticed shadows of fatigue lingering under his eyes. The country had trouble attracting doctors and doctors already in the field worked long hours. Hopefully her arrival would ease his workload. And those shadows.

She forced her attention back to what she wanted to do. 'Please, call me Bronte.'

He took her proffered hand and shook it. This time his fingers wrapped around her hand gently sending a delicious tingling along her arm.

'Welcome to the outback, Bronte. Call me Huon.' His fingers lingered for a moment on her hand. Warmth spread through her. Was he flirting with her? Men didn't usually flirt with a plain Jane like her not unless they were trying to get closer to her gorgeous sister, Stephanie. It was a shame she'd taken so long to work that out.

Damien had been the last man to flirt with her and she was still dealing with the fallout from that disaster. Professionally she'd always stood up for herself. Outside of work she didn't always have the same self-assurance. But the debacle with Damien had made her determined to transfer that work confidence into her personal life. She wouldn't allow herself to be used again.

She had no intention of dating again for a long time.

From "PREGNANT ON ARRIVAL" by Fiona Lowe

® and ™ are trademarks of the publisher. The edition published by arrangement with Harlequin Books S.A.